From The Ark: NieR Automata Lore
Jump to: navigation, search
A true ending of the game which you can get only after getting both endings C and D. 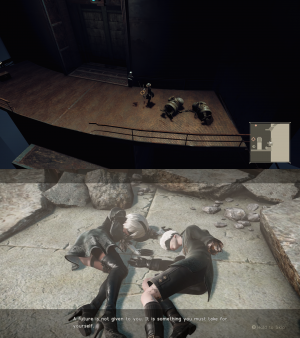 Fun fact: Weight of the World - the End of YoRHa that plays during a shoot 'em up sequence has a chorus that sings "la la la". This chorus consists of a whole dev team including Yoko Taro

Ending E is somewhat similar to how game Routes in NieR Automata are done.

Since my writing process is complex, I can’t really explain it in one word. But speaking of multiple playthroughs, I created the story in the original Nier to change like 'A→B→alt.B', but using this method accentuates the repetitiveness towards the end. On top of that, I did not want to do the same thing again so I tried 'A→alt.A→B' this time.
—Yoko Taro, USgamer Interview[1]

There is an argument towards all endings being canon similar to Drakengard/DoD series, but for all we know from Side Materials, it is ineed the current true ending. Some Side Materials take place after it and it has a small epilog.

Yoko Taro decided to do the epilogue to ending E inside a concert because he doesn't like doing the same thing twice (he'd put Nier 1's epilogue inside its strategy guide).
—Famitsu Weekly NieR Automata Special Feature Interview[2]