Pod 042 to Player
Query: The content of this section is posted with author's permission. Date of copy: October 5, 2017. Source: [Reddit post] by /u/komasanzura . Proposal: Please visit source link to support the author.

Please remember to turn on CC for subs on YouTube!

What is this stream about?

f there is demand for this I will upload/PM it after a week or so has passed. At the moment I want to leave it as an unlisted YT video so that if I get any corrections I can update it easily.

After that point it was straight-up advertising for the NieR music concert and the DLC, which I don't think is needed and most people would definitely skip it. There’s also a “premium” extra 20 minutes beyond that for picking up viewer comments but as it required a paid subscription to Niconico to watch I don't want to go there. 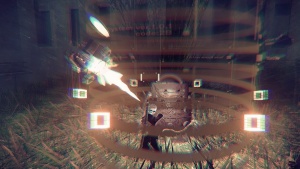 Code: 2B while hacking

Pod 042 to Player
Query: The content of this section is posted with author's permission. Date of copy: October 5, 2017. Source: [Reddit post] by /u/TwoSidea. Proposal: Please visit source link to support the author.

Because Eve picked it up and left it there, after Adam died.

Since the Aliens; their creators, or rather, their parents are gone, they feel empty, a lack of something. So in order to remove the lack of not having a parental figure to rely on, they created something closer to that; an older sibling.

Taura: If Yuuki Aoi is not in the game, I won't finish making it!

Saito: Do Androids even need tissues?!

Yokoo: Well, tissues have a lot of uses. To fuel the fujoshi's dreams