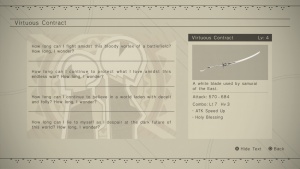 Virtuous Contract
2B' default short sword. The story is clearly about 2B. 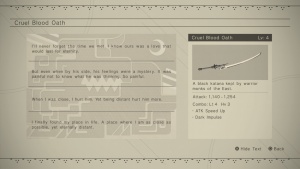 Cruel Blood Oath
The story is clearly about 2B and is a rather metaphorical retelling of 2B's feelings from side materials, primarily Memory Thorn.

You can find this weapon only in Route B since it requires 9S hacking. It is located under the desert zone so location corresponds to Memory* novels Sand Temples.

"I'll never forget the time we met. I knew ours was a love that would last for eternity."

2B had strong feelings for 9S ever since their first encounter in Memory Cage.

The palm of her hand feels strange as it resists, a feeling she's never experienced before. It's not like this is the first time she's been made to destroy a friend's body. When another member of YoRHa became inoperable on the battlefield, and she had to destroy them, she didn't feel anything like this. She wonders if she's finished destroying him yet.


The feeling known as guilt. Or perhaps even remorse. But regardless of what it is, emotions are forbidden. In the moment she tries to suppress those forbidden feelings, 2B feels something else well up within her, as if to resist that. Memories of 9S.

His voice as he'd shout, '2B'. The smile he made when when he told her how fun it was to have a partner — it was such a bashful smile. She wonders during which mission it was when he was so shocked by her unexpected clumsiness, as well.
—Memory Cage [1]

2B: As a result, we feel nothing at the thought of throwing our lives away. That's ... just how we were created.

2B: ... I wouldn't hesitate for even a moment to give my life in battle.

"But even when by his side, his feelings were a mystery. It was painful not to know what he was thinking. So painful."

But each and every “new” 9S was still a different person and while 9S showed similar behavior and immerse care for 2B - he was very secretive about what he was actually thinking, like actually often knowing about her real mission.

2B (narration): The 9S from back then, and the 9S before me, are two different people.

2B (narration): I wonder if I was afraid.

2B (narration): Or perhaps I was wrong.

2B (narration): Even so, I continued on by his side, without even knowing the name of the emotion I'd been feeling.

2B: What are you talking about……

2B (Narration): Was it because I didn’t want to worry Operator 6O? Or maybe……

2B (Narration): I was afraid of seeing my own darkness?

"When I was close, I hurt him. Yet being distant hurt him more."

By being close to 9S she ends up betraying him, but being cold to him hurts him even more - see 9S reaction when 2B repeatedly declines to call him “Nines” in the game.

But all of her efforts were fruitless. No matter what she did, she couldn’t change the end result. It didn’t matter if she treated 9S with affection or indifference. It didn’t matter whether she called him “Nines” or not. At the very end, 2B will always receive orders to kill 9S.
—Memory Thorn [5]

"I finally found my place in life. A place where I am as close as possible, yet eternally distant."

This is a throwback to the ending of Memory Thorn where 2B makes a promise with 9S to continue killing him after 9S saved her from attempting to suicide and suicided himself instead. That was truly a Cruel Blood Oath.

Her mission ended in failure. She failed as an E type. She’s now a defective product that can’t even justify her own operating costs.

2B widened her eyes in shock, her head covered in a shower of blood. 9S, having sliced his own throat, slowly fell over. She cradled his body in her arms, her own screams of ‘Why?!’ sounding distant to even herself.

Even with his rough breathing, 9S was smiling.

That I won’t hesitate to kill you. The next time, or the time after that. Not because of her mission, but because that’s what 9S wanted. To grant his wish of meeting again...she’ll kill him.

2B (narration): Even if the pain of killing 9S is the sin I must bear.

9S (narration): Even if the joy of meeting 2B is my reason to live. 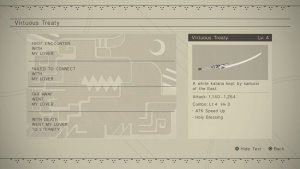 2B’s default heavy weapon from prologue. Which is lost after the black box explosion but Commander asks you to retrieve it by E-mail and marks it on the map (though it is not an actual quest).

The story of the weapon most likely follows the events of the game and the time of you upgrading the weapon is roughly similar to described events.

In English the story is written in UPPERCASE (machines usually talk like that in the English subtitles).

In Japanese it uses katakana and is especially interesting (or frustrating) because it has no particles whatsoever. It could be read like this:

"My lover and I touched for the first time, but I failed to grasp her heart. She went far away, and became eternal through death." Or in many different ways, replacing "My lover and I" with just "I" or "my lover", "her" with "I" and "I" with "her", etc.

Katakana there could be taken as a sign of 9S physically breaking down and/or going through some serious mental damage (like how Eve's narration usually uses normal writing systems and switches to katakana only after Adam's death in A Long Story) as opposed to becoming more machine-like.

For reference, katakana is sometimes used in situations when someone is in so much pain that they can no longer form proper words in their mind--only sounds. In A Long Story during ending D some of 9S painful lines are written in katakana.

"FIRST ENCOUNTER WITH MY LOVER"

Every time after a memory wipe, 9S meeting of 2B is his “first”.

9S (narration): 2B and I first met in one of the hallways in the Bunker.

Other lines are self-explanatory.

Both Cruel Blood Oath and Virtuous Treaty are from the same set and have a lonely beast in the background picture. 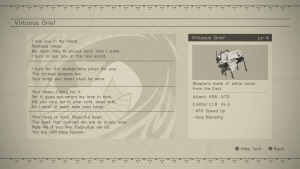 Virtuous Grief
The story is most likely about N2 and its twisted feelings for 9S. 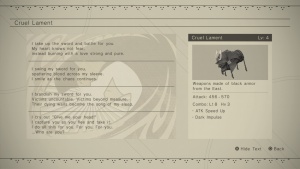 Cruel Lament
Most likely about 9S in Route C. 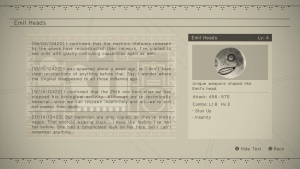 Shows us a glimpse into the future. The events from lvl4 are also mentioned in the Timeline.